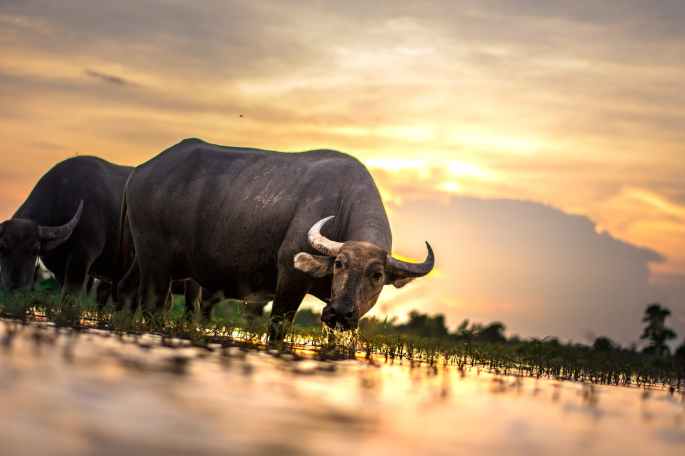 It is a coined word meaning “cow (= ox) forest”. The name is based on the ideal image of cows, which are often recognized as mere livestock animals, running around freely in a forest. It contains our hope that the world’s deforestation and climate change will be stopped, while animal welfare will be enhanced.

The burner logo of OxForest Web Magazine is designed with the motif of a baobab tree that grows widely on the African continent. In the savanna of East Africa, where many giant baobab trees are found, the Massai value their cows and are known as “cow herders” who live with them, unlike how our industrial agriculture treats cows and produces greenhouse gas emissions.

In Southeast Asia, the word “forest ox” actually exists, and in Khmer language it is called Kouprey[1], which was once distributed in the forest areas of Cambodia, Laos, Vietnam, and Thailand. However, due to poaching and depletion of forests as their habitat, it is now said that about 250 forest oxen live in Cambodia or are already extinct. Since 1996, it has been listed on the IUCN Red List as “Critically Endangered“[2].

The fate of cows including forest oxen in Southeast Asia is just an unaccetable reality. Australian philosopher Peter Singer wrote a 1975 book “Animal Liberation: A New Ethics for Our Treatment of Animals“[3] and called “speciesism” which refers to the differing treatment or moral consideration of individuals based on their species membership.

After 40 years from Animal Liberation, Yuval Noah Harari, the author of the bestseller “Sapiens: A Brief History of Humankind (2014)”[4], wrote a 2015 Guardian article under the title “Industrial farming is one of the worst crimes in history”[5] and called “the fate of industrially farmed animals is one of the most pressing ethical questions of our time.”